Showing posts from April, 2011
Show all

Book Review: The Professor and the Madman 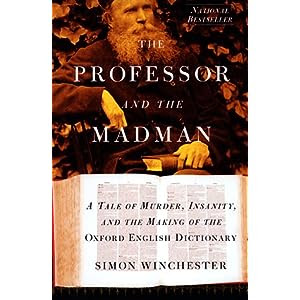 When attempting to describe the plot of The Professor and the Madman, I find myself undecided as to where to begin. The cover of the book describes it as a novel about the making of the Oxford English Dictionary. That is true, in a way. Simon Winchester, the author, spends much time on detailing the history of dictionaries and the difficulties in collating them - a far more interesting topic than one would imagine. However, the making of the OED, while an intrinsic aspect of the book, is not its focus. Most prominent in the novel is the story of the the Madman, an American Civil-War doctor who went mad, supposedly as a result of the horrors he witnessed during the war. Despite his incarceration in an assylum, the Madman becomes one of the most important contributors to the creation of the OED. The Professor, a less featured character, but by no means a lesser character, is the editor of the OED who initially doesn't realize that his most important contributor is a long-standing r
Post a Comment
Read more

Should I Use Shall? May I Use Should? Shall I Use May?

- April 12, 2011
I learned in my Technical Writing course that the words “may”, “should”, “can” and “will” are to be avoided at all costs in a requirements document, unless they are in a note or a special section called “Recommendations” or something similar. However, I had a customer who insisted that this is wrong because he has been using these [forbidden] words in documentation for eternity “and it is all over the Internet”. I asked him how the reader is supposed to know whether it is a requirement, a recommendation, or an option. His answer: At the beginning of the doc he has a table defining “shall”, “should”, and “may” (he doesn’t use “will” or “can”.) So I did a bit of Internet research and found this quote from the IEEE style manual (quoted here: http://www.ieee802.org/20/email_req/msg00102.html ) The word shall is used to indicate mandatory requirements strictly to be followed in order to conform to the standard and from which no deviation is permitted (shall equals is required to). The
3 comments
Read more 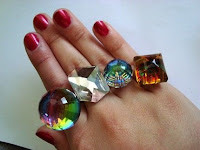 According to this eHow article entitled "How to Wear Gaudy Jewelry": Bright green baubles, earrings that look like rocket ships and a bracelet bigger and louder than Texas all qualify as gaudy jewelry. Gaudy jewelry is flamboyant, obnoxious and a heck of a lot of fun. Just because the jewelry is gaudy doesn’t mean you can’t wear it with flair. Some stylish tips will help you wear gaudy jewelry better than those chicks on the fashion pages. Are you kidding me? There is nothing you can do to wear rocket ship earrings stylishly. Nothing. Well, the article disagrees with me and goes on to mention five ways to wear gaudy jewelry and look good: Be selective: That's right. The first rule of wearing over-the-top fashion accessories (like big green baubles) is to be "selective". Stay minimal: Um...how much flamboyant and obnoxious jewelry is too much? Keep the rest of the outfit simple: Like anyone is going to notice that, in addition to yellow banana earrings,
Post a Comment
Read more

Going Where No Mogul Has Gone Before

Let me just say this: I don't know much about this man as a person. I haven't done research into either his private or public lives. I don't know what his politics are and I don't know if he really is a nice guy, or if he just presents well, but I am in awe of Sir Richard Branson  who seems to look at the current state of technology and ask, "How can I take this to the next level?" He thinks big. Virgin Galactic is a perfect example. It is true that SpaceshipOne was not Branson's idea, and the original technology was not developed by Virgin (it was  Burt Rutan's  design). However, it took a person as flamboyant and visionary as Richard Branson to recognize the potential. He became one of the driving forces behind making regular, safe space flight into a reality with Virgin Galactic. True, it costs $200,000 for a space ticket  and the spacecraft are still being tested, but the price will come down (although possibly not in my lifetime!) and Virgin Ga
Post a Comment
Read more
More posts